The Xel'Naga are creators of two of the dominating races of the Koprulu Sector, the Zerg and Protoss.

The Xel'Naga are a psionically-attuned, ancient, cosmic race. They were occasionally referred to as the most powerful species known in the universe. While there are vague references of the Xel'Naga conquering worlds and uplifting species, their most notable involvement was with the Protoss and Zerg. Their interest in these two species was due to the Xel'Naga's cyclical life cycle. When the incredibly long-lived Xel'Naga were due to come to an end, the Xel'Naga would use these two species to be reborn. Ironically their survival was severely jeopardized when the Zerg turned on them.

The Xel'Naga cherished all life and refused to kill anything, not even the entity at KL-2. The Protoss eventually followed a version of this philosophy, called the "Dae'Uhl".

The etymology of the word "Xel'Naga" has been described as a Protoss language term meaning "Wanderers from Afar" but has also been described as their true name. The Protoss referred to the Xel'Naga as the "Ihan-rii", meaning "Eternal Protectors". The Xel'Naga have also been called the "Great Teachers", the "Makers", and the "Guardians", as well as "Gods".

The Xel'Naga were incredibly long-lived by Protoss standards, but not immortal; eventually their species would come to an end. In the interest of survival they planned to create new Xel'Naga by uplifting two species. A pair of qualities was required and these were defined by the Xel'Naga as the purity of essence and the purity of form, and each uplifted species would be targeted for one of them. Over an extraordinarily long period of time, the two species would naturally come together and merge, forming the next generation of Xel'Naga. 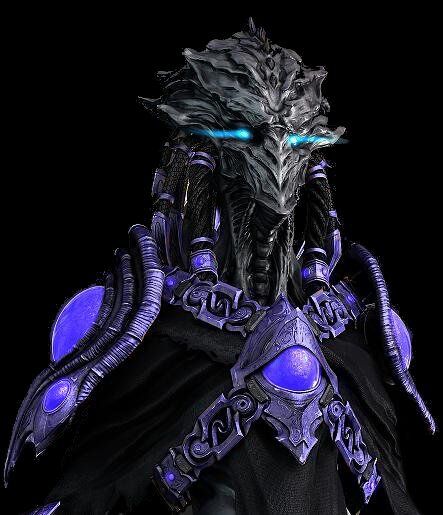 Retrieved from "https://starcraftfanfiction.fandom.com/wiki/Xel%27Naga?oldid=13388"
Community content is available under CC-BY-SA unless otherwise noted.