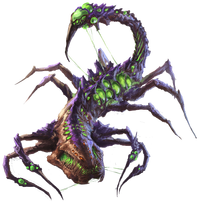 The Coercer is a relatively rare Zerg breed, resembling a silverfish in appearance and acting akin to a 'cancer factory' in function.

Its core genus, if it has one, is unknown, as the Coercer contains the DNA of many Zerg breeds and, unlike the larva, uses them to synthesize virus-like biochemicals. These biochemicals are extremely hazardous, resistant to the most effective anti-toxins, and, paradoxically, dangerous even to the Zerg. Coercers have been known to cannibalize other Zerg to fuel the metasynaptic processes that generate the biochemicals, often accompanied by Spawnling escorts for this very reason.

The Coercer's body is host to countless small organisms that live on the carapace, constantly feeding on each other. The Coercer can spontaneously launch a number of these creatures to swarm a location. Anything under the ensuing cloud not only has its vision obscured, but if it touches the skin of any unit within its effected area directly, chemicals are injected into the unit, sending it into a bloodlust and frenzy and therefore making it a danger to friend and foe alike.

In addition, Coercers can produce purpose specific spores and hurl them at a small target area, the spores exploding in a dense cloud. The fungal mist that results is capable of temporarily taking control of biological forces in the target area, forcing them to do the Coercer's bidding, albeit temporarily. The spores are also prone to igniting due to a flammable accelerant contained within them.

Retrieved from "https://starcraftfanfiction.fandom.com/wiki/Coercer?oldid=13363"
Community content is available under CC-BY-SA unless otherwise noted.