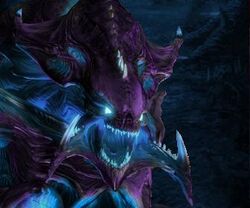 The Chimaeralisk is a specialized Scylla Brood adaptation of the Hydralisk.

Chimaeralisks commonly reach 5.5 meters in length and can draw themselves up to over 2.4 meters in height. It is common for Chimaeralisks to burrow and await their prey to enter killing range before attacking, destroying their enemies in a deadly crossfire. Chimaeralisks can climb vertical surfaces and, due to muscular augmentation, Chimaeralisks are swift and lethal.

Chimaeralisks may attack directly with scythe-like arms or strike from a distance with volleys of armor-piercing spines, the latter being the more common method of attack. Hundreds of spines are stored in the upper carapace plates.

These spines have been specifically evolved from the defensive urticating (stinging) hairs of the Slothien and may be "grooved" for increased range. They can penetrate 2 cm of NeoSteel even at maximum range, such penetrative force stemming from their remarkable muscle structure (4,000 muscles compared to a Terran's 629).

In addition, these spines have been known to emanate a form of psionic energy that causes machanical targets to malfunction. Fortunately for their enemies however, a few seconds warning is given before a Chimaeralisk launches such a volley, courtesy of the carapace folding back.

Retrieved from "https://starcraftfanfiction.fandom.com/wiki/Chimaeralisk?oldid=9122"
Community content is available under CC-BY-SA unless otherwise noted.