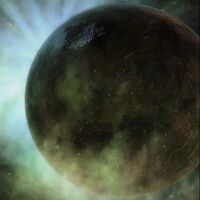 Aiur is the homeworld of the Protoss, located in a star system with a single yellow star and possessing a single moon not unlike Luna. It is at least the third of the system's terrestrial planets, if not further out.

Aiur is a huge world located on the fringes of the Milky Way Galaxy. It was engineered by the Xel'Naga and left to itself for a long period of time. When the Xel'Naga returned, they discovered the Protoss on the world. They guided Protoss evolution, albeit too fast. As a result, they were forced to flee, and the Protoss fell into a racial madness-fueled conflict called the Aeon of Strife.

When the Xel'Naga were forced to flee the world, they left behind large amounts of Khaydarin crystals.

Aiur was devastated in the Aeon of Strife but after the period ended, it began to steadily recover.

For more information see Aiur on the parent site

Retrieved from "https://starcraftfanfiction.fandom.com/wiki/Aiur?oldid=7618"
Community content is available under CC-BY-SA unless otherwise noted.